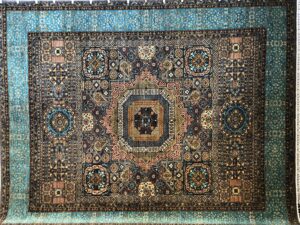 uk Dynasty came to power in Egypt and Syria in the mid thirteenth century. By the 15th century, they had established a thriving carpet industry in Cairo, the capital of Egypt. These people originally came to the Middle East as slave soldiers from Turkic, Mongol and Circassian tribes in Central Asia. They were bought and trained by Arab rulers, converted to Islam, and turned into Elite palace soldiers. The word Mamluk actually translates to “owned”. Eventually, the Mamluks revolted and seized power for themselves, ruling for two centuries. They were warriors on a fierce level, and typically killed or replaced their own leaders every five years. Surprisingly or not, they were also huge patrons of art.

The Mamluk era is often referred to as a “Renaissance of the Islamic Arts”. The rugs are thought to have a “sublime” quality and to be more than just fine carpets but sophisticated works of art symbolizing spiritual themes of unity. The geometric forms themselves are representational of simplicity and singularity, while the whole of the designs, many forms interconnected, are complex.
This rug is named Simonetti after a former owner. It is one of the most famous Mamluk Carpets that exists, as well as one of the largest of its type. This rug has five medallions instead of the usual two or three. It also has a brighter color palette than most. It dates back to the year 1500, and is believed to have been made in Cairo, probably in a palace.
This rug has a double field with two medallion-like structures. One is eight-sided; the other eight-pointed. The “eight” theme appears in many Mamluks.
In 1517, the Mamluk territories were conquered by the Ottomans. Mamluk carpet production continued after but the Mamluk people were commissioned by the Ottoman courts to produce rugs in the “Cairene” style which competed with the Persian rugs of that time. The Mamluk carpet production slowed quickly and eventually stopped altogether. There are only around 100 original Mamluk rugs left in the world. Only one remains in Cairo, and the rest are in museums. The museum pieces are not often displayed because it is feared that too much exposure to light will fade their colors. Today, rug makers all over the world seek to replicate and draw from the Mamluk style, particularly in Egypt, Afghanistan, India and Pakistan.
Characteristics
Mamluk carpets are known for their lustrous wool, fine weave, and soft colors dominated by pale greens, yellows and reds. Their designs are distinctive-complex, large medallions made up of intersecting forms. These forms are based on the tradition of Islamic geometric ornament. The borders are made of oblong medallions or “cartouches”. A variation of the Mamluk called Paramamluk, features all over patterns of smaller hexagons, octagons and squares. These are often known as the “chessboard” carpets. The Paramamluk has been attributed to Damascus, which was a large center in the Syrian portion of the Mamluk realm. One instantly noticeable characteristic of the mamluk carpets is that they appear totally mathematical and at the same time, totally mystical, similar to the existence of the rugs themselves.

This is an example widget to show how the Sidebar looks by default. You can add custom widgets from the widgets screen in the admin. If custom widgets is added than this will be replaced by those widgets.